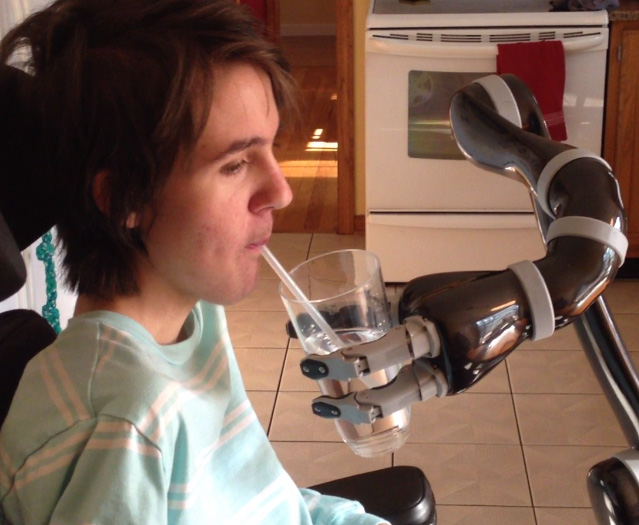 Jordan is a senior at Saratoga Springs High School and will be graduating in June. At the age of 2 Jordan

was diagnosed with Duchenne Muscular Dystrophy (DMD).  Duchenne is a muscle wasting disease for

which there is no current treatment or cure. Jordan is the youngest of three brothers and lost his oldest

Jordan is outgoing and has always strived to be as independent as possible. He has been in a power

wheelchair since the age of 10. Two years ago Jordan lost the ability to feed himself, scratch an itch, get

a drink, or feed  his dog, Patriot. Patriot is a service dog and the inability to treat or feed his dog has

diminished their necessary bond.  Patriot can do many tasks for Jordan and be his constant companion

but there is a limit to his assistance.

Within half an hour after the JACO Robotic Arm was attached to his chair, Jordan was able to eat

unassisted, get and pour a drink of water, and give his dog a treat, something we never thought we

would witness again. The JACO arm opens up the world again for Jordan and so many things he thought

he would never do again are now possible.

In Jordan’s words, “I have been on the losing end with this disease and JACO allowed me to be on the

winning side and the taste of victory was sweet.” He added, “JACO will give me the freedom to live a

fuller and more productive life. Although my parents will do anything for me, it would feel so good to

Jordan will be attending college in the fall and is interested in engineering. JACO will give Jordan the

ability and confidence to forge ahead in this new chapter of his life. Children grow up wishing to be

wants to be independent.