Michael is a senior at Wright State University and will graduate in December of 2015 with a degree in accounting. He will then pursue a job in his chosen field.  School has been challenging for Michael not just because of his area of study, but also because of the extra limitations his Duchenne muscular dystrophy has placed on him. Since doctors diagnosed him at age four, this progressive disease has slowly robbed Michael of his physical capabilities. He first required a power wheelchair in middle school and is now losing the remainder of his arm strength.

Despite the physical limitations of many of its students, Wright State University is a model of accessibility.  Unfortunately, the “real” world will not be as accommodating as Wright State’s campus and will pose many unique challenges which are currently addressed by the university. In order to pursue a job, Mike will need the ability to open doors, push elevator buttons, take books from a shelf, and pick things up off the floor. Currently, he could not handle any of these situations on his own. However, with a JACO arm, these activities and many others will become possible. Perhaps, he could also use the arm to eat lunch with his coworkers.

Michael had the opportunity to test-drive JACO in April.  Within a few minutes, he was able to control the arm.  In the first half hour, he mastered picking up a water bottle and taking a drink, something he cannot do on his own!  In addition, Michael picked up a set of keys from the floor and successfully carried several other items that he would use on a regular basis. The increase in independence is almost beyond imagining, and having his own JACO would be a big step towards leveling the playing field.

Thank you so much for taking the time to explore Michael’s page. We appreciate any amount you can donate! 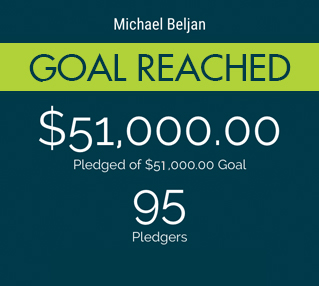